But will science answer? There is growing evidence that cannabis has medically beneficial properties; however, to understand its true potential we need rigorous, unbiased research.

One of Richard Nixon’s lesser-known misdemeanors came in 1970, when he made cannabis a Schedule 1 substance – a decision that has frustrated research into the plant’s medical applications. It wasn’t until November 2016 that the US lifted a federal cultivation restriction that hindered cannabis research by US academic institutions.

The easing of cultivation restrictions for US academic institutions is indicative of the larger shift by the pharmaceutical industry back towards re-examining natural products (produced by animals, plants, bacteria and fungi) as a source of medicine. The 1990s saw a “green rush” of bioprospecting by the pharmaceutical industry as it sought to mine Earth’s biodiversity. Despite significant success (the vast majority of today’s antibiotics are derived from natural products), by the 2000s most pharmaceutical companies had terminated their natural product discovery programs, citing difficulties in obtaining samples at sufficient yields, ecological and legal restrictions, and insufficient capital investment.

However, recent years have seen the industry move back towards natural products as a source of new drugs. Because they occur naturally, candidate drugs derived from natural products have quicker development times, and are more likely to pass toxicity studies. Natural product pathways are highly complex, which makes them challenging to synthesize in the lab, and has led to several drugs consisting of standardized plant-based extracts (containing a number of quantified compounds) gaining regulatory approval.

In this context, the three primary species of cannabis (Cannabis sativa, Cannabis indica, and Cannabis ruderalis) are of great interest as a potential source of medicines. Firstly, historic restrictions stymied much of the research that might otherwise have occurred in the 1990s, when many other natural products were investigated for medical use – there is significant catching up to do. Secondly, most research on cannabis has focused on the known major cannabinoids (in particular THC and CBD) and on two key receptors (CB1 and CB2 receptors – found in every mammal). Pharmaceutical companies have tended to focus on screening their current libraries of molecules against these two receptors, but have not studied the effects of other molecules (e.g., naturally occurring minor cannabinoids). In my view, it is here where the most exciting medical potential lies.

Over the last ten years, evidence has been presented that cannabinoids could have therapeutic effects in a number of major diseases, such as multiple sclerosis, epilepsy and cancer. However, as both last year’s independent UK review and this year’s US National Academy of Sciences study point out, the restrictions imposed on cannabis research mean that many of these studies were carried out without adequate control trials, or with inadequate sample sizes, rendering them largely anecdotal.

The 1990s saw a ‘green rush’ of bioprospecting by the pharmaceutical industry.

Whatever the medical applications of cannabinoids turn out to be, it would be a missed opportunity not to explore them. It is for this reason that Oxford University and Kingsley Capital Partners have launched a pioneering research program to investigate the role of cannabinoids in biology and medicine.

We hope this research program will prove a step in the right direction, building on initiatives led by companies and academic institutions across the world. Cannabis has already been used as a therapeutic aid for centuries – now is the time to harness 21st century science to understand its mode of action and explore its potential in the most rigorous way possible.

Why Scientists Should be CEOs

Turning Over a New Leaf

Image of the Month: Bee Happy

February Issue of The Cannabis Scientist 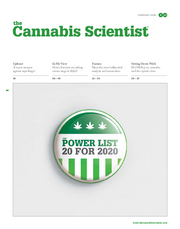