Novel antibacterial agents are needed… Could cannabidiol fill the void?

The rise of antibiotic resistance has been dubbed the “antibiotic apocalypse.” It’s an alarming turn of phrase that has sent scientists scurrying off to discover new compounds for our antimicrobial armamentarium in the least likely of places – from cockroach brains (1) to the Atacama Desert (2). Now, cannabis joins the fight.

The activity of cannabidiol (CBD) against Gram-positive bacteria (a group including the Staphylococcus and Streptococcus families, and the notorious superbug MRSA) was documented in the 1970s, but only now is this activity being fully characterized by Mark Blaskovich and colleagues (3). The team has conducted assays of cell viability, explored bacterial biofilms through confocal microscopy, and treated skin infections in immunocompromised mice; research was conducted at the University of Queensland in collaboration with Botanix Pharmaceuticals, and was funded by Botanix and an Innovation Connections Grant from the Australian government.

In each case, the results have impressed Blaskovich, who cites three unexpected findings: “i) the breadth of activity against a range of Gram-positive bacteria, including strains highly resistant to existing antibiotics, ii) the lack of development of resistance to CBD after long periods of exposure, and iii) the mechanism of action, which did not appear to involve membrane disruption.” The combination of widespread activity and slow development of resistance are promising fundamental features, while the proven capacity of CBD to disrupt biofilms further increases the promise of CBD to treat tricky infections.

Human studies are being planned – particularly for topical application, but the researchers also want to investigate the use of CBD for systemic infections in mice. At the same time, the team hope to uncover CBD’s mechanism of antibacterial action. Thinking forward to the most likely applications, Blaskovich says, “At a minimum, CBD could help replace decolonization agents like mupirocin, which are used to disrupt biofilms before surgery to reduce postoperative complications.”

The more ambitious hope? That CBD-based medicines could serve as reinforcements in the ongoing fight against resistance. The battle waged in the ‘golden age of antibiotics’ may be behind us, but the war rages on.

I've always wanted a career in which I could practice my creativity, even when I worked on the assembly line in a fish factory. At one time, I channeled this need into dance, drawing, poetry and fiction, and I still do most of these things. But, following completion of my MSc(Res) in Translational Oncology and time working in labs and as a Medical Writer for major pharmaceutical companies, I'm happy to find myself in a career that allows me to combine my creative side with my scientific mind as the Deputy Editor of The Analytical Scientist. 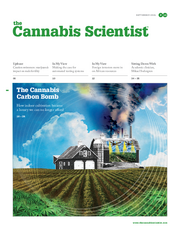