Discovering a cannabinoid with therapeutic effects is just the start of the journey for drug companies – we also need to find ways to deliver the drug into the body safely and effectively. The cannabis plant contains hundreds of different compounds – and most are difficult to formulate – but if overcoming the complexities means new medicines for unmet needs, it’s worth it.

Some researchers take the viewpoint that cannabis should be used in its whole form because the mixture of different compounds are what give the plant its intriguing medical properties. However, the scientific community still does not understand what every substance in the plant does, which will make it very difficult to turn the plant into a regulated medical product. The active pharmaceutical ingredient in most medicines is a single molecule that can easily be characterized. If a medicine contains two or more active molecules then development is more difficult because you must investigate the interactions between the molecules – and if you have 700 different compounds then thorough investigation becomes virtually impossible. The consequences of getting it wrong are severe. In 2016, there was a disastrous clinical trial in France involving the testing of a fatty acid amide hydrolase (FAAH) inhibitor, which resulted in a patient death. FAAH inhibitors aren’t based on cannabinoids, but play a role in the breakdown of endo- and exocannabinoids. Such disasters highlight the challenge of synthesizing safe compounds when you do not fully understand the biochemistry and pharmacology involved.

I became interested in cannabis around 15 years ago, when a colleague and I were looking for novel classes of painkillers. We were very dissatisfied with what was on the market at the time (and little has changed since then) – yes, we have opioids and non-steroidal anti-inflammatories, and combinations of the two, but these drugs can have severe side effects. Eventually, we became interested in cannabinoids, partly because cannabis has been used for pain relief for thousands of years in many different cultures.

Today, I am the Chairman, Chief Executive Officer and President of AXIM Biotechnologies, which is developing a variety of pharmaceuticals, nutraceuticals and cosmetic products. One of our main focuses is on cannabinoids, and we are working on nine different formulations for fourteen different indications, including pain, eczema, psoriasis, vitiligo, dry eye, and irritable bowel syndrome – results from our Phase II clinical trial for irritable bowel syndrome (being conducted in the Netherlands) are expected very soon.

When it comes to formulation and drug delivery, cannabinoids tend to be very hydrophobic and challenging to work with, but some can be more difficult than others; THC, for example, is extremely volatile and oxidizes at room temperature. Much industry attention has focused on inhalation as a delivery method, but we wanted to investigate alternative approaches and have seen success with a more unconventional drug delivery format: chewing gum. Chewing gum presents challenges in terms of formulation and manufacture, but it also has a number of inherent advantages. For instance, the act of chewing itself is thought to offer neuroprotective properties. The scientific literature suggests that chewing can improve cerebral circulation, boost memory, and reduce stress. Importantly, the use of chewing gum as a drug delivery vehicle bypasses the gastrointestinal system. Some cannabinoids can be transformed into toxic metabolites when they reach the gut or liver. Inhalation, of course, can bypass this issue, but so too can chewing gum, where the active chemical enters circulation via the trans-oromucosal system.

As well as developing our own innovative medicines, we are also investigating how we can enhance older medicines. The first cannabinoid-based medicine approved by the FDA was Marinol (manufactured by AbbVie) in 1985. Marinol contains a synthetic form of THC (dronabinol) and is approved for loss of appetite and nausea. The drug is administered via a gel capsule, but can cause a number of side effects due to first-pass metabolism in the liver, where 90 percent of the active is metabolized. We are currently developing a bioequivalent of Manitol in chewing gum form – and so far we’ve shown a significant increase in bioavailability (over 70 percent).

It’s clear that cannabinoids have captured the interest of the industry and although there are still significant challenges hindering research, attitudes are slowly changing. In January 2017, the United States National Academy of Sciences released a substantial report – over 400 pages long – that reviews the scientific research conducted around cannabis and cannabis-derived products since 1999. The report includes information on indications where there is clinical evidence of a therapeutic effect with cannabis. And there are certainly many – perhaps the most exciting prospect is that cannabinoid research may lead to new medicines for diseases that currently have no effective treatment – brain cancer, stroke, myocardial infarction, and epilepsy to name just a few. 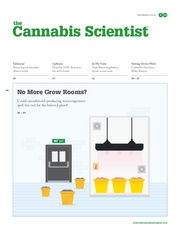