Markus Roggen was voted onto our 2020 Power List after setting up an independent research laboratory dedicated to optimizing cannabis analysis and processing. In an interview from the Emerald Conference 2020, Markus tells us about his slightly reluctant entry into the industry, the maddening inefficiencies in current extraction protocols, and his mission to put solid science at the heart of the industry.

How did you get into the cannabis industry?

Largely by chance! I have a PhD in organic chemistry and in 2014 I was finishing my postdoc in San Diego. I am a keen athlete in my spare time and my triathlon coach encouraged me to stay in the area to keep up my training. “Then find me a job!” I joked; it was unlikely I would find another position in chemistry locally. To my surprise, she came back to me a few weeks later with a potential role – her sponsor, a compounding pharmacy, was setting up a cannabis analytical laboratory and needed a chemist to oversee operations. My first answer? “Hell no!” I knew nothing about cannabis and had a lot of misconceptions; back then, I thought you smoked the leaves! But friends and family pointed out that it was a legal (and fast-growing) industry in California, so I decided to give it a try. Later, I was headhunted by a vertically integrated cannabis company that wanted to start carrying out extraction and production of manufactured cannabis goods.

Given your initial reluctance, what's kept you in the cannabis industry?

I’m a research scientist at heart and there is so much to learn in the cannabis industry. In many cases, we don’t even know the basics like melting points and solubilities. For a scientist, it is a playground – everywhere you look there is something new to discover! In this industry, everyone wants to build the largest greenhouse or the biggest extraction facility. Meanwhile, fundamentals like the best light spectrum for cultivation or methods for cannabinoid testing haven’t been researched yet. I sometimes joke that my role is: “making cannabis boring again!”

For a scientist, it is a playground – everywhere you look there is something new to discover!

Is that why you set up the independent research lab CBDV?

Exactly. The cannabis industry is young and a single company will not be able to sustain a large enough chemical research facility to generate all the data we need. My idea was to build one independent, centralized research facility that can service the whole industry. Take extraction, for example; right now, most labs carry out decarboxylation using a prescribed method as if it is dictated by a higher power. I wanted to know what method actually worked best. I worked with PerkinElmer to develop a method for in-process testing of decarboxylation using infrared spectroscopy. We realized that there is a rate difference between cannabinoids and did computational studies to figure out why. Fascinating stuff for chemists, though perhaps not for everyone else!

What research questions do companies bring you?

There is only really one question: how do we make it better? For example, we’re working on developing better CO2 extraction. It is a complex process but offers the greatest opportunity because CO2 – in its supercritical fluid critical state – can be as precise as a scalpel, while ethanol or butane is more like a hammer. We like challenging questions. Ask us the questions that no-one can figure out!

You've mentioned data analytics  – how are you applying big data to cannabis extraction?

Let’s continue the example of CO2 extraction. You could set up separate experiments to study the influence of pressure, temperature, and so on, but there are dozens of factors at play and to study the interplay between them you would have to do hundreds of experiments. Instead, we do a design of experiments analysis using historical data from cannabis producers, including thousands of extraction runs. Even at the same facility there is inherent variance in every run, whether they put a few grams more or less in, use different cultivars with different concentrations, or run at 50–100 PSI lower pressure – add data from several facilities and the differences escalate. We can analyze all that variation computationally to understand how each factor acts alone and in combination to affect the end result – all without having to do a single experiment!

What are your hopes for the future?

Big data analytics obviously needs big data, so most importantly we want to partner with more companies and share the knowledge we gain for the benefit of the field. It’s starting to dawn on the industry (and the public) that cannabis is not just THC and CBD, or even the 10 cannabinoids we test for. At a previous company, I remember a patient who got a tincture against seizures from our dispensary and was delighted when it worked. But when they returned and bought the same tincture again, it didn’t. The concentrations of all the compounds we could analyze for were identical, but the oils were made from two different cultivars. Was there a minor component missing in the second batch? We had no way to know, and neither did the patient – it was deeply frustrating. How can we make consistent products if we don’t see most of what’s in the product? At CBDV, we are developing methods of cannabinoid analysis more akin to metabolomics, to help the industry expand their horizons beyond the major cannabinoids and provide more comprehensive information to consumers.

Do we need new tools?

For the most part, no. We just need to make better use of technology and scale-up strategies from other industries. Some equipment may be great in the lab but absolutely unsuitable for large-scale production. For example, crystallization in the cannabis industry often involves… buckets! In the pharma industry, they use crystallization towers that allow continuous recrystallization with very precise parameters to ensure optimum bioavailability. We also need the right expertise. Classically educated scientists have not typically stepped into the cannabis industry. Often, when a cannabis company says “backed by science,” they have one or two chemists with a Master’s or PhD. And though that’s certainly better than none, it’s a far cry from industries like pharma. Plus, when cannabis companies do hire senior scientists from other industries, they tend to choose people with expertise in running large, existing facilities, not developing new processes – so they don’t always have the right skills to maximize efficiency. I’d like to see more process engineers enter the industry.

This article is part of a series of interviews with selected speakers at the 2020 Emerald Conference. Other experts sharing their California dreams (and nightmares!) include: 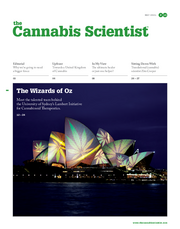